We want to firmly establish the presence of large sharks, dolphins, sunfish and other marine giants in Dorset's waters. Using non-invasive methods - drifting baited cameras, underwater drones, hydrophones, our expeditions will provide the opportunity for some thrilling encounters, raise the profile of marine conservation locally and gather valuable data on the health of the environment

We have now had chance for a first look at the data from the C-POD deployed last July off Anvil Point, Swanage. This ran from 26 July to 17 October, just a bit short of 4 months, but it wasn’t retrieved until 14 February. The C-POD records selected “clicks” which can be analysed later to identify likely cetacean encounters. This analysis can distinguish porpoise click “trains” from bottlenose dolphin click “trains” – the two most likely species to be encountered at this site. It also records the inclination of the C-POD (it would normally float vertically but will be tilted by a running tide) and sea temperature. 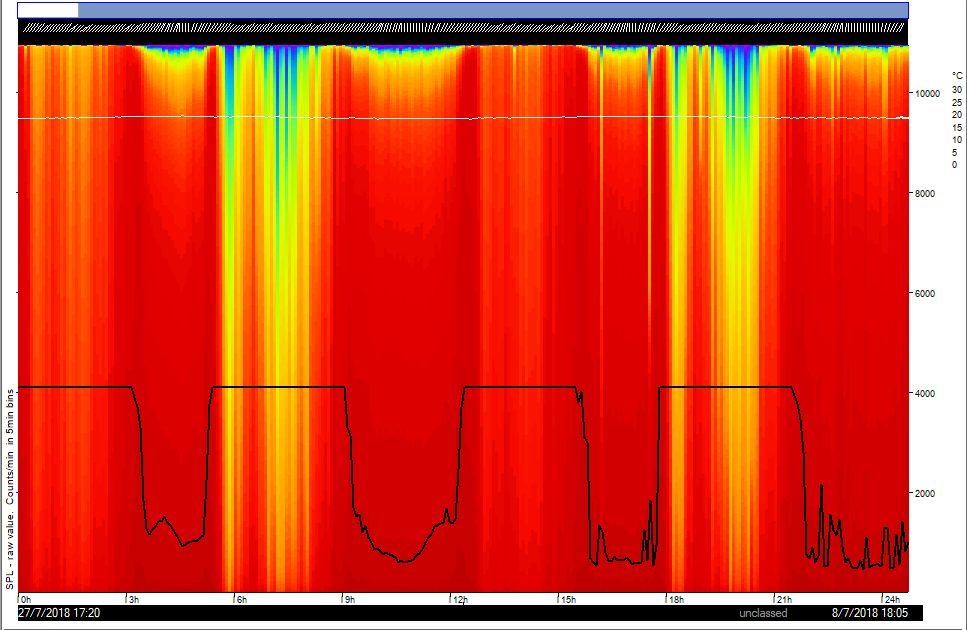 The above chart needs a little explanation. This shows 24hrs of data from the C-POD, from first deployment on 24 July. At the very top is an indicator of the tilt of the C-POD – you can see that this alternates between short periods of vertical alignment (this is “slack water”, when no tide is running) and the rest of the time when the C-POD is increasingly tilted as the tide picks up, then gradually returns to the vertical at the next slack period, approx. 6hrs later. The white line near the top shows temperature (note the °C scale on the right) and the black line shows the number of clicks recorded per minute. This also changes with the tidal cycle, dropping of markedly at slack water and rising rapidly as the tide picks up. The C-POD has a default limit of 4096 clicks per minute, to avoid filling the data card prematurely, which is why the peaks are clipped off the graph. The peak could be over 200,000 clicks per minute and is caused by sediment being transported by the tide. The colour bars show the loudness of the clicks (sound pressure level), over a five minute period, with red being the quietest and purple the loudest. This shows how this is a very noisy site when the tide is running.

Picking out any cetacean sounds from all of this is a bit of a challenge, especial when the tide is running. Zooming in on the graph above at maximum tidal flow shows a confusing cluster of very frequent, loud clicks. Not surprisingly, we haven’t been able to pick out any dolphin or porpoise encounters from such data. At these times, the C-POD is only recording only one or two seconds of data each minute, before the 4096 cap is reached.

Looking at the same length of time at slack-water, you can see that the environment is much quieter, with only a few clicks per second as background noise.

Now it is possible to distinguish dolphin and porpoise sounds from the background – the C-POD software will do this, but it is necessary to validate any "click-trains” identified by the software.

I’m pretty sure this shows a porpoise echolocation signal – the frequency distribution fits well, with the modal value between 120 and 145kHz

Having looked through the data, I’m fairly confident of the following porpoise encounters - dolphins need a bit more work.

During the period the C-POD was deployed, one porpoise was sighted from the nearby cliffs (09:10 30 July 2018). This coincides with a time of strong tidal current and does not feature in the C-POD data. There were a number of sightings of groups of up to 14 bottlenose dolphins in the area on 3 September, but these are also not detectable from the C-POD data

Last July we deployed a C-POD – a dolphin and porpoise click-detector on loan from Chelonia Ltd, near Anvil Point lighthouse, Swanage. This is in sight of the dolphin-watchers hut in Durlston Country Park, and therefore provides a great opportunity to compare two methods of recording cetaceans. The C-POD batteries last 4-6 months, so we intended to retrieve it in early December, but a mixture of weather and logistics meant we were unable to get out until mid-February. To make deployment and retrieval a bit easier, the C-POD is attached to a Lightweight Release Transponder (LRT), on loan from Sonardyne. This is designed to moor equipment to the seabed for long periods, releasing it when it receives an acoustic signal from a surface transducer. That sounds simple, and it should be, but by mid February we were worried the batteries might have run out or that fouling by marine organisms might prevent release. It was also possible that the entire lot had been moved by winter storms and strong tides, and might not be where we left it. So – it was with some trepidation that we set out on Friday afternoon aboard Swanage-based San Gina II. On reaching the site, we put the transducer in the water and pressed the “test” button – getting an instant reply telling us the C-POD was 230m away. We initiated the release and a minute later we all cheered as the buoys broke the surface nearby. The jubilation was short-lived, as the buoys then disappeared back under the waves, dragged down by the tide – although it was a neap tide, it was still strong enough to submerge the buoys and we had to wait another two hours before we could retrieve the kit. Once it was all aboard, we headed back to Swanage, with an amazing sunset behind us. The only worry now is that the C-POD was working while it was on the seabed – more on that when I’ve had a chance to look at the data card. An unexpected bonus – it was dark when I got back and when I began rinsing off the C-POD before opening it, sparkles of blue-green bioluminescence flashed each time I brushed it. My kids were fascinated, but we couldn’t work out quite what it was that was flashing – possibly a tiny worm or an even smaller amphipod, or something else we couldn’t see. Photo credits ©Sarah Hodgson

Have you heard the Dorset Dolphins?

We have some exciting news! In the next two weeks we will retrieve our C-POD hydrophone from the depths of Purbeck. It was deployed off Anvil Point lighthouse in July and should have recorded 4-6 months-worth data. What will this include? Well that’s the interesting part: we are hoping to detect the echo-location “clicks” of toothed cetaceans (whales, dolphin and porpoises). We may not be able to always see them, but we should be able to hear them!

Since deploying the hydrophone in July, there have been 11 reports of dolphins off Durlston Head totalling approximately 45 individuals - see latest reports here. Dorset Wildlife Trust has been alerted to many further along the coastline too! Approximately 20 common dolphins were seen in Weymouth Bay and 10 bottlenose (including juveniles) off Portland, both from last month. So we are really excited about retrieving the C-POD soon.

This opportunity was only possible through Chelonia Limited who manufacture tools that utilize passive acoustics to determine presence, density and behaviour of echo-locators, and Sonardyne, a subsea technology company who lent us a release mechanism that will allow us to retrieve the hydrophone from the seabed. Tom Greasty of www.swanageseafishing.co.uk will be our skipper for the event.

We will also be embarking on another adventure with Andy Marsh of Sonardyne, but more on that later.

With a number of recent sightings of large porbeagle sharks off Dorset, we wanted to find out more about these animals, but without catching them. In 2016 we successfully tested a simple drifting baited camera, capturing a large tope. We are currently testing the suitability of adapting lightweight high-altitude balloon radio-tracking equipment for tracking multiple drifting buoys, each with cameras and hydrophones. This will allow survey effort to be spread over a wide area from one boat and, following any alerts from the drifters, the boat could approach the buoy to either pick up live media from the buoy or deploy an underwater drone.

We have also deployed a passive acoustic monitoring device (C-POD) near Swanage to pick up any passing dolphins or porpoises - this has been placed close to a cliff-top dolphin watching hut at Durlston Country Park - it will be interesting to compare detection rates with the shore-based watchers.